Webcare: How Far Can You Go? Best and Worst Practices!

Webcare is the monitoring of reactions and complaints of customers on the internet, and responding accordingly. With the arrival of platforms like Facebook and Twitter, people were able to easily communicate with brands and companies. These developments have caused webcare to increasingly professional over the last years. Many companies have a dedicated webcare department in addition to having their regular customer service. Because social media has a very open character, companies often find themselves on this ice. Because, how far can you go? In this blogpost we’ll give three examples of quality webcare, and three examples of companies that went a bit too far. In other words: best and worst practices!

Webcare is the ultimate way to experiment with customer communication, because it’s much less formal than with more traditional channels like phone or email. Many companies use social media to show that, besides being customer friendly, they can also be funny or cheeky. A funny, clever reaction or comment can spread like wildfire through likes and retweets. This makes for great (and free!) word-of-mouth exposure. The tweet from Rabobank in the example below is a perfect example of a very traditionally professional company not taking themselves too serious on social media. Imagine Rabobank communicating this way via e-mail. It’s unthinkable. On social media, however, it’s perfectly normal and found funny.

2: Samsung: the Story of the Dragon and the Kangaroo

In may 2012 Samsung showed the world how webcare is properly done when a customer approached the company via facebook with a request. He was wondering if, since he was loyal customer and already owned a tv, a phone, and a laptop from Samsung, they could maybe send him the new Samsung Galaxy S3 for free. Accompanying his request he posted a drawing he’d made of a dragon. Of course, this was meant more as a joke than anything else. Samsung could’ve responded to this very straightforward and impersonal, explaining they didn’t just give out free products. Instead, the company responded in a very clever way, and added a drawing to their post as well: a kangaroo riding a unicycle. The customer liked the response so much that he posted a screenshot of it on Facebook, which then went viral, giving Samsung a ton of media exposure.

But the story didn’t end there: Samsung was so happy with the free exposure that they sent the customer a customized Galaxy S3 with on the back of the phone the dragon he drew for them. So he got his free phone after all! The customer in return shared the accompanying letter he received with his new phone on Facebook again, resulting in yet again more publicity for Samsung!

“Dear Shane,
As a token of our appreciation for the positive media you helped us attain earlier this spring, we’d like to thank you with this very cool one-of-a-kind Samsung Galaxy S III. This is the only customized S III in Canada, and we hope you enjoy it as much as we enjoyed watching the story of the Dragon and the Kangaroo go viral.

A large part of webcare is monitoring and dealing with complaints and negative reactions. Especially larger companies are often faced with negativity via social media. It’s important for a company to always leave a reply, because not replying to complaints is perceived as rude, and could hurt the company’s reputation. If you’re not able to immediately provide an unhappy customer with a fitting solution, let them know, and get back to them later when you are able to provide a solution. By appropriately resolving complaints in a timely manner, you’ll make sure your company is viewed in a positive light, which will benefit your reputation.

In 2015 T-Mobile received a negative message from a customer, and decided to respond accordingly. 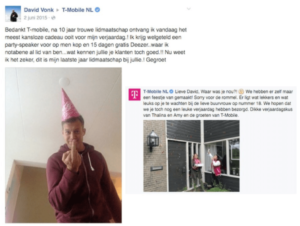 A customer dissatisfied with the present T-mobile gave him for his birthday.

You’d expect that this message giving them the finger would hurt T-Mobile’s status. However, their response was to send two employees to the customer’s house to deliver a cake. The company posted a photo of the endeavour online, which received a lot of positive attention on social media. This way, T-Mobile cleverly turned bad exposure into positive exposure!

We mentioned earlier in this blogpost that for some companies webcare is the perfect opportunity to show their funny side. However, there’s also a downside to this. When webcare was still up and coming, people found it amusing when a company was trying to be funny. But now people are less easily amused, plus the joke has to be on-topic. Post NL, for example, once thought it was more important to make a joke about mobile network provider Hi, then to actually assist an unhappy customer.

Instead of assisting the customer to the best of his abilities, the webcare representative of Post NL makes a joke about Hi’s webcare department. Hi then responds, which sets off a series of interactions awkward enough to make you squirm, ignoring the customer’s complaint. Customer service should never be secondary to an attempt at humor.

Personal communication is a very important aspect of webcare. Addressing people personally, and letting them know who they’re communicating with (for example, by adding your first name) makes for a more human-like interaction since people will know they’re actually talking to a person from within the organization/company, instead of a computer. Using computers for webcare can cause annoyance pretty easily, as Domino’s Pizza demonstrates very well: 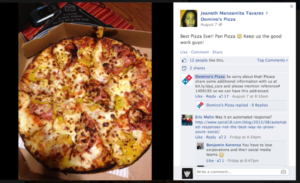 A customer gave Domino’s a compliment on her Facebook page, saying that she had just had the best pizza ever. It’s everything a company could ask for: free publicity from customers on social media. Well done Domino’s’, you’d say. However, the company managed to turn positive publicity into negative publicity by answering to the customer’s post with an automated reply. In the reply Domino’s apologized, and asked the customer to fill in a form so they could handle the ‘complaint’. It was noticed by a lot of people, which lead to Domino’s receiving a lot of negative reactions on their Facebook page. Let’s consider it a lesson for the Domino’s webcare department. With just a simple, short, personal reply to the customer’s post this could all have been prevented. So think hard before you start using automated replies on social media.

Our last example perhaps best reflects the opposite of what you want to achieve with webcare. Just like with ‘regular’ customer service, webcare is all about service. After all, customer is king. It’s therefore important to stay professional, even if you choose to use humor and sassiness as a means of communication. This webcare representative of Sanoma Media, however, didn’t seem to agree:

Clearly the webcare representative of Sanoma woke up on the wrong side of the bed that morning. The conversation on Twitter shows that the customer didn’t receive satisfactory customer service from Sanoma, which she explains with a slightly annoyed remark towards the representative, saying he/she didn’t properly read her question. The representative replies by saying: ‘What do you want? Act like a school teacher or receive assistance?’. In this case, the webcare representative lost his/her patience, and let emotion take control. Unfortunately, the whole world was able to see the conversation. The screenshot shown above shows that the tweet was shared more than 70 times within an hour. Sanoma was flooded with complaints. This illustrates well how one single tweet can leave a significant dent in a company’s reputation.

Take Advantage of What Webcare Has to Offer

The examples shown above show that webcare has both its virtues and vices. With the the internet, and specifically social media, making companies more approachable, there’s almost no threshold to keep people from complaining. In addition, people tend to share negative stories rather than positive ones. Webcare offers an attentive ear, and the possibility to engage in conversation with the customer. There are a number of guidelines every company should adhere to when taking on webcare.

Advertising on LinkedIn: Serious Business or Business as Usual?

Put Your Brand on the Map Using Instagram Stories

How to Use Video on Different Online Channels

Need tailored advice for your project?